A Dutch-Italian-German team of astronomers has observed a huge glow of radio emission around a cluster of thousands of galaxies. They combined data from thousands of LOFAR antennas that were focused for 18 nights on an area the size of four full moons. This is the first time astronomers have been able to capture radio emission from such a large area for such a long time and in such detail. They publish their findings Wednesday night in the journal Science Advances.

The astronomers studied Abell 2255. That is a cluster of thousands of galaxies about a billion light years from Earth in the direction of the constellation of Draco. The new images are 25 times sharper and have 60 times less noise than images taken with a precursor of LOFAR. The team had to develop new techniques to process the large volume of data.

Turbulence and shocks
"Based on the new images and our calculations, we think that the radio emission from Abell 2255 has been generated during the formation of the cluster," said research leader Andrea Botteon (Leiden University, the Netherlands and Università di Bologna / INAF, Italy). He adds that it is the first time that astronomers studied these processes very far away from the cluster center. "In our theory, we assume that the particles are accelerated by the enormous turbulence and shocks produced during the formation of the cluster. In turn, these motions can also amplify the magnetic fields."

In the future, the researchers want to target the LOFAR telescopes and yet-to-be-built telescopes such as the Square Kilometer Array for longer periods of time at other clusters of galaxies. In addition, they intend to observe Abell 2255 in more detail. By doing so, they hope to learn more about the so-called cosmic web that interconnects clusters of galaxies. 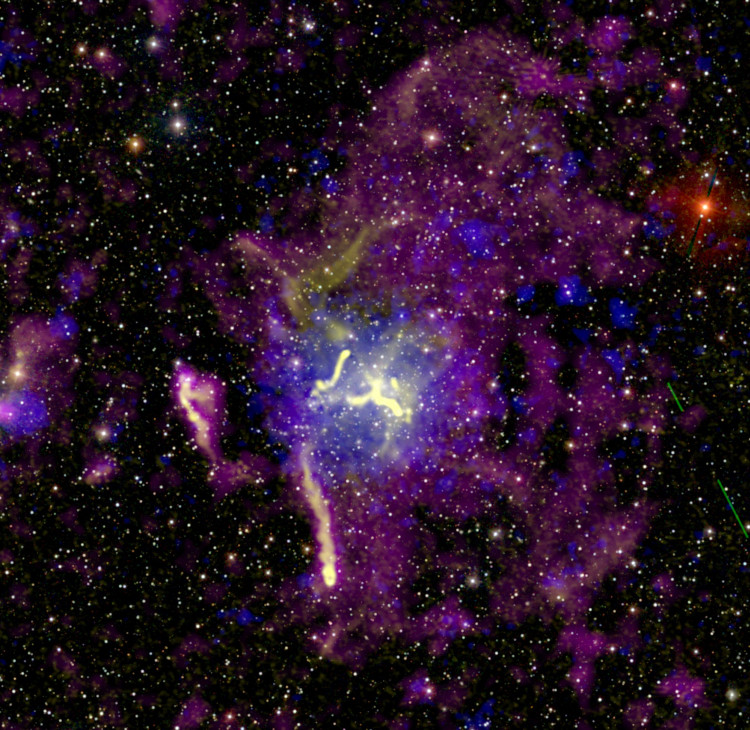 Composite image of the galaxy cluster Abell 2255. Blue are X-ray data from ROSAT. These show hot gas between the galaxies. Yellow and purple are radio data from LOFAR. The purple glow is radio emission surrounding the entire cluster. The yellow streaks are fast-moving particles in the cluster's magnetic fields. The background image was taken with the SSDS. The image is about 18 million by 18 million light years in size. From Earth, the image covers a region of the sky the size of four full moons. (c) ROSAT/LOFAR/SDSS/Botteon, et al. [high resolution]