A team of Leiden astronomers has managed to calculate the first 100 million years of the history of the Oort cloud in its entirety. Until now, only parts of the history had been studied separately. The cloud, with roughly 100 billion comet-like objects, forms an enormous shell at the edge of our solar system. The astronomers will soon publish their comprehensive simulation and its consequences in the journal Astronomy & Astrophysics.

The Oort cloud was discovered in 1950 by the Dutch astronomer Jan Hendrik Oort to explain why there continue to be new comets with elongated orbits in our solar system. The cloud, which starts at more than 3000 times the distance between the Earth and the Sun, should not be confused with the Kuiper belt. This is the rim of rock, grains and ice in which the dwarf planet Pluto is located and which orbits relatively close to the Sun at about 30 to 50 times the Earth-Sun distance.

Text continues below artist's impression of the Oort cloud. 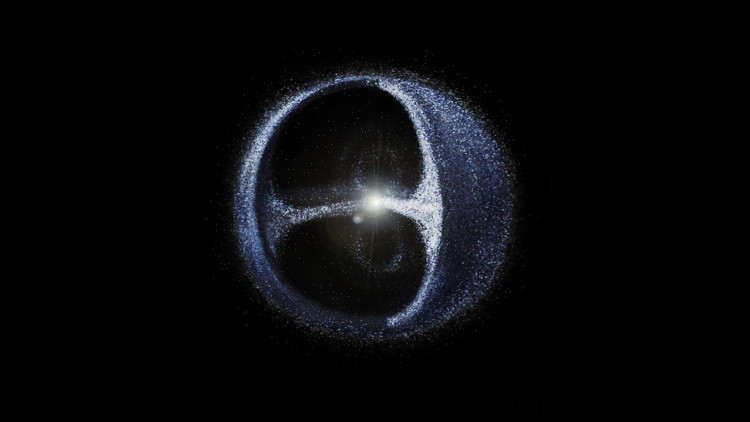 Artist's impression of the Oort cloud. The density has been exaggerated. (c) Pablo Carlos Budassi [CC BY-SA 4.0] via Wikimedia

Loose events tied together
How exactly the Oort Cloud must have formed has remained a mystery until now. This is because a series of events take place which a computer can hardly reproduce in its entirety. Some processes lasted only a few years and took place at relatively short distances, comparable to the distance between the Earth and the Sun. Other processes lasted billions of years and took place over light years, comparable to distances between stars. Astronomer and simulation expert Simon Portegies Zwart (Leiden University in the Netherlands) explains: "If you want to calculate the whole sequence in a computer, you will irrevocably run aground. That's why, until now, only separate events were simulated."

The Leiden researchers started from separate events, as in previous studies, but new is that they were able to connect the events with each other. For example, they used the end result of the first calculation as the starting point for the next calculation. In this way, they were able to map out the entire genesis of the Oort cloud.

Simulation of the first 2 million years of an asteroid's life. The asteroid is born near the large planets Jupiter, Saturn, Uranus and Neptune. Through repeated interactions with these heavy planets, the asteroid is eventually 'kicked' into the Oort cloud. (c) Portegies Zwart et al.

Comets from inside and outside the solar system
The Oort cloud, the Leiden simulations confirm, is a remnant of the protoplenatary disk of gas and debris from which the Solar system emerged some 4.6 billion years ago. The comet-like objects in the Oort cloud come from roughly two places in the Universe. The first part of the objects comes from close by, from the Solar system. These debris and asteroids have been thrown out by the giant planets. However, some of the debris did not succeed in doing so and is still in the asteroid belt between Mars and Jupiter. A second population of objects, the Leiden astronomers conluded, comes from other stars. When the Sun was just born, there were about a thousand other stars in the vicinity. The Oort cloud may have captured comets that originally belonged to those other stars.

In addition, the Leiden astronomers could immediately debunk a number of events. They, for example, argue that the Oort cloud was formed relatively late. That is, after the Sun had been ejected from the group of stars in which it was born. With their simulations, the astronomers also reject the hypothesis put forward in 2005 that the Oort cloud was a consequence of the migration of the giant planets in the Solar system. This hypothesis, which turns out to be rebunked, would have to explain the excess of old craters on the moon.

Complex but not unique
"With our new calculations, we show that the Oort cloud arose from a kind of cosmic conspiracy," says Portegies Zwart, "in which nearby stars, planets and the Milky Way all play their part. Each of the individual processes alone would not be able to explain the Oort cloud. You really need the interplay and the right choreography of all the processes together. And that, by the way, can be explained quite naturally from Sun's birth environment. So although the Oort cloud is complicatedly formed, it is probably not unique."

During the calculations, the researchers regularly wondered how such a complicated process could actually emerge. Portegies Zwart: "Despair often got the better of us. Only when the calculations were completed, did all the pieces of the puzzle suddenly fall into place and it all looked quite natural and self-evident. That is, I think, one of the most beautiful aspects of being a scientist. You suddenly realize how distorted our thinking concerning this problem was, until it actually turned out to be rather natural."