A team of astronomers led by Dutch scientists have directly imaged a giant planet orbiting at a large distance around a sun-like star. Why this planet is so massive, and how it got to be there, is still a mystery. The researchers will publish their findings in the journal Astronomy & Astrophysics.

The planet in question is YSES 2b, located 360 light years from Earth in the direction of the southern constellation of Musca (Latin for The Fly). The gaseous planet is six times heavier than Jupiter, the largest planet in our solar system. The newly discovered planet orbits 110 times more distant from its star than the Earth does from the Sun (or 20 times the distance between the Sun and Jupiter). The accompanying star is only 14 million years old and resembles our Sun in its childhood.

The large distance from the planet to the star presents a puzzle to astronomers, because it does not seem to fit either of the two most well-known models for the formation of large gaseous planets. If the planet had grown in its current location far from the star by means of core accretion, it would be too heavy because there is not enough material to make a huge planet at this large distance from the star. If the planet was created by so-called gravitational instability in the planetary disk, it appears to be not heavy enough. A third possibility is that the planet formed close to the star by core accretion and then migrated outwards. Such a migration, however, would require the gravitational influence of a second planet, which the researchers have not yet found.

Young Suns Exoplanet Survey (YSES)
The astronomers will continue to investigate the surroundings of this unusual planet and its star in the near future and hope to learn more about the system, and they will continue to search for other gaseous planets around young, sun-like stars. Current telescopes are not yet large enough to carry out direct imaging of earth-like planets around sun-like stars.

Lead researcher Alexander Bohn (Leiden University): "By investigating more Jupiter-like exoplanets in the near future, we will learn more about the formation processes of gas giants around sun-like stars."

The planet YSES 2b was discovered with the Young Suns Exoplanet Survey (YSES). This survey already provided the first direct image of a multi-planet system around a Sun-like star in 2020. The researchers made their observations in 2018 and 2020 using the Very Large Telescope of the European Southern Observatory (ESO) in Chile. They used the telescope's SPHERE instrument for this. This instrument was co-developed by the Netherlands and can capture direct and indirect light from exoplanets. 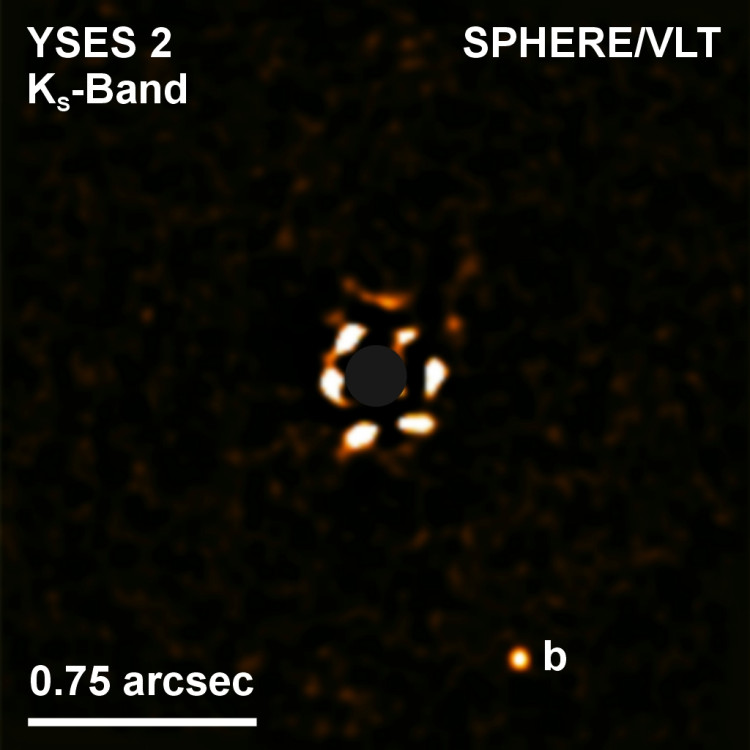 A direct image of the exoplanet YSES 2b (bottom right) and its star (centre). The star is blocked by a so-called coronagraph. (c) ESO/SPHERE/VLT/Bohn et al.