An international team of astronomers have become the first in the world to detect isotopes in the atmosphere of an exoplanet. It concerns different forms of carbon in the gaseous giant planet TYC 8998-760-1 b at a distance of 300 light years in the constellation Musca (Fly). The weak signal was measured with ESO's Very Large Telescope in Chile and seems to indicate that the planet is relatively rich in carbon-13. The astronomers speculate that this is because the planet formed at a great distance from its parent star. The research will be published in the scientific journal Nature on Thursday.

Isotopes are different forms of the same atom, but with varying number of neutrons in the nucleus. For example, carbon with six protons typically has six neutrons (carbon-12), but occasionally seven (carbon-13) or eight (carbon-14). This does not change much the chemical properties of carbon, but isotopes are formed in different ways and often react slightly differently to the prevailing conditions. Isotopes are therefore used in a wide range of research fields: from detecting cardiovascular disease or cancer to studying climate change and determining the age of fossils and rocks.

Quite special
The astronomers were able to distinguish carbon-13 from carbon-12 because it absorbs radiation at slightly different colours. "It is really quite special that we can measure this in an exoplanet atmosphere, at such a large distance," says Leiden PhD student Yapeng Zhang, first author of the article.

The astronomers had expected to detect about one in 70 carbon atoms to be carbon-13, but for this planet it seems to be twice as much. The idea is that the higher carbon-13 is somehow related to the formation of the exoplanet.

Co-author Paul Mollière, from the Max Planck Institute for Astronomy in Heidelberg, Germany, explains:  "The planet is more than one hundred and fifty times further away from its parent star than our Earth is from our Sun. At such a great distance, ices have possibly formed with more carbon-13, causing the higher fraction of this isotope in the planet’s atmosphere today."

Story continues below animation of isotopes on exoplanets.

'My exoplanet'
The planet itself, TYC 8998-760-1 b, was discovered only two years ago by Leiden PhD student Alexander Bohn, co-author of the article. "It' s awesome that this discovery has been made close to 'my' planet. It will probably be the first of many."

Ignas Snellen, professor in Leiden and for many years the driving force behind this subject, is above all proud. "The expectation is that in the future isotopes will further help to understand exactly how, where and when planets form. This is just the beginning." 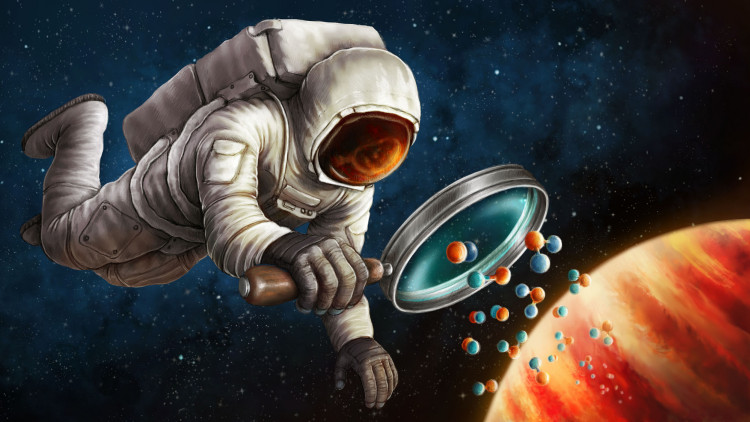 Cartoon about the discovery of carbon-13 in the atmosphere of an exoplanet. In reality, the astronomers were sitting behind their desks analysing the spectra of the exoplanet TYC-8998 b made by ESO's Very Large Telescope in Chile. (c) Daniëlle Futselaar (Artsource)