To news overview
May 10 2021 View article in dutch
Share:

An international team of researchers led by Alice Booth (Leiden University, the Netherlands) have discovered methanol in the warm part of a planet-forming disk. The methanol cannot have been produced there and must have originated in the cold gas clouds from which the star and the disk formed. Thus, the methanol is inherited. If that is common, it could give the formation of life elsewhere a flying start. The researchers will publish their findings on Monday evening in Nature Astronomy.

Methanol, CH3OH, is one of the simplest complex molecules. It is considered by astronomers to be a precursor for the pre-biotic chemistry essential for life because it can be used to form, for example, amino acids and proteins. Researchers had already shown that methanol is present in one cold planet-forming disk around a nearby star, in comets and in the cold gas clouds from which stars form. Now, for the first time, a large reservoir of methanol has been discovered in a warm planet-forming disk.

This reservoir of methanol cannot have formed in the warm disk itself, as this is chemically impossible. The researchers therefore propose that the methanol ice was already present on the dust grains in the cold gas cloud from which the star and the disk originated. 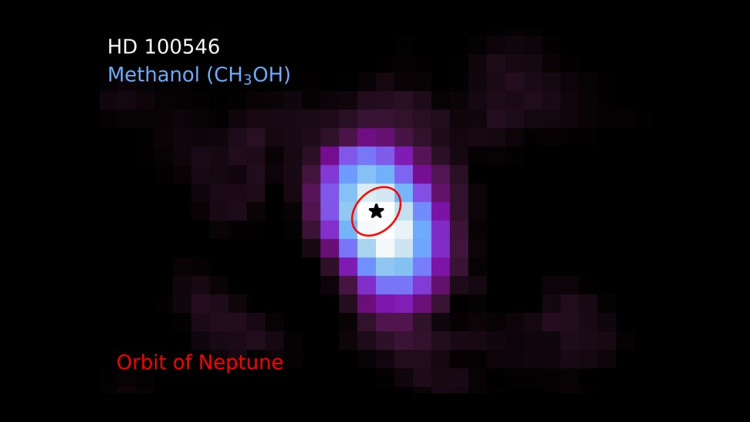 A map of the methanol (white) in the planetary disk around the star HD 100546. The red line is the orbit that the 'cold' planet Neptune would have if it were orbiting this star. So the white methanol is almost entirely in the 'warm' part of the planet forming disk. (c) ALMA/Booth et al.

Inherited
Research leader Alice Booth (Leiden University): "This is a very exciting and surprising result. Whilst warm methanol has been detected in the warm, young disks, because of the nature of this disk this is the first clear observational evidence that complex organic molecules can be 'inherited' from the earlier cold dark clouds phase.”

The researchers made their observations on the planet-forming disk around the much-studied star HD 100546. This disk and star are about 10 million years old and are located about 360 light years from Earth in the direction of the southern constellation of the Fly (Musca). 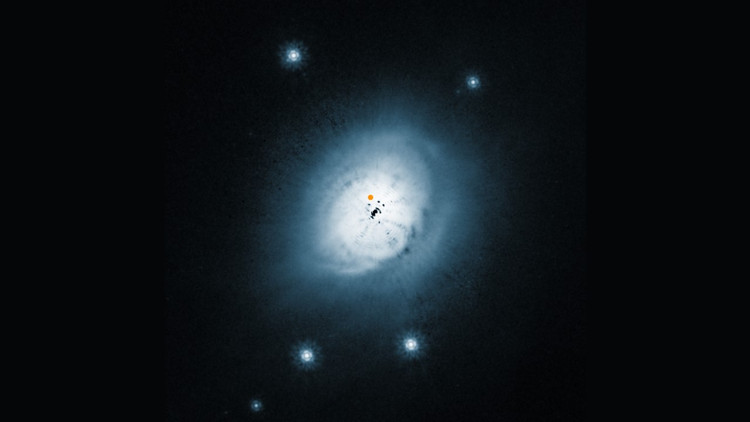 The star HD 100546 has a large protoplanetary disk. In 2013, a possible planet-in-the-making was found in the cold outer region of this disk (orange dot). Today's study is about the warmer inner part of the disk. The black spots in the image are artefacts. (c) ESO/NASA/ESA/Ardila et al.

Surprise
The researchers used the ALMA observatory, located high up in the Chilean Andes. The astronomers were actually looking for the simple molecule sulphur monoxide, but to their surprise they also detected methanol lines in their spectra.

In the future, the researchers hope to collect more data so that they can observe the methanol lines at higher spatial resolution. They will also search for more complex oxygen-containing molecules such as dimethyl ether (C2H6O), methyl formate (C2H4O2) and acetaldehyde (C2H4O). These molecules, which are also found in comets and dark clouds, are believed to some of the key ingredients for prebiotic chemistry.

The researchers want to compare the quantities of these substances in the planet-forming disk with the quantities in comets. This way, they can get a better idea of what proportion of the organic content survives the star formation process. And that, in turn, is important for a better understanding of the chemical processes during the formation of planets. After all, icy asteroids such as comets are the building blocks of planets. 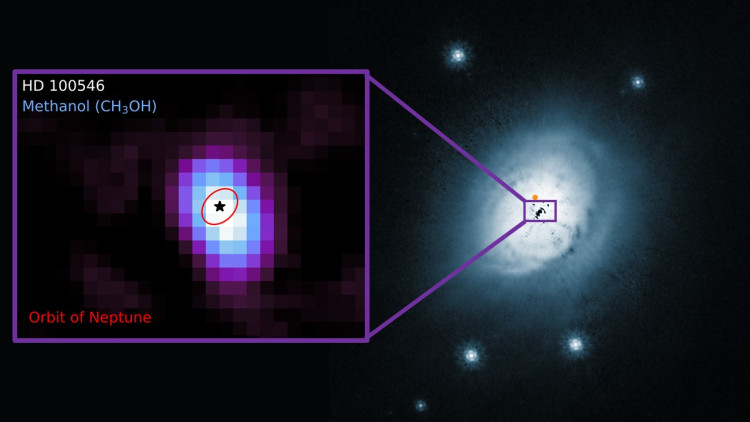