Two international teams of astronomers (with significant Dutch involvement) have published two scientific papers with new information about the famous fast radio burst FRB20180916B. In an article in The Astrophysical Journal Letters, they measure the radiation from the bursts at the lowest possible frequencies. In Nature Astronomy, they examine the bursts in the greatest possible detail. While the articles provide new information, they also raise new questions.

In 2007, the first fast radio burst (FRB) was discovered. But what exactly causes the bursts is not yet clear. Since 2020, scientists have suspected a connection to strongly magnetic neutron stars, called magnetars. One of the best-known fast radio bursts is FRB20180916B. This FRB was discovered in 2018 and is 'only' 500 million light years away from us in another galaxy. The FRB is the closest so far and has a burst pattern that repeats every 16 days: 4 days of bursts, 12 days of relative quiet. That predictability makes it an ideal object for researchers to study.

Lowest radio signals ever
An international team of researchers led by Ziggy Pleunis (a graduate of the University of Amsterdam, now McGill University, Montreal, Canada) studied the FRB with the European network of LOFAR radio telescopes. They had tuned the LOFAR antennas between 110 and 188 MHz. Those are almost the lowest possible frequencies the telescope can receive. They caught 18 bursts. This was unexpected because FRBs usually transmit in high frequencies. FRB20180916B thus breaks the low-frequency record. Incidentally, the researchers suspect that the burst emits radiation in even lower frequencies and will be looking for that in the near future.

Besides records, the observations also provide new insights. The low-level radio emission was quite 'clean' and arrived later than bursts with higher radio emission. Co-author Jason Hessels (Netherlands Institute for Radio Astronomy ASTRON and University of Amsterdam): "At different times we see radio bursts with different radio frequencies. Possibly the FRB is part of a binary star. If so, we would have a different view at different times of where these enormously powerful bursts are generated."

Biggest detail ever
A team of researchers led by Kenzie Nimmo (ASTRON and University of Amsterdam, the Netherlands) used the European VLBI network of radio telescopes, which includes one of ASTRON’s 12 Westerbork telescopes in Drenthe and the 100-meter Effelsberg telescope in Germany. They looked in the greatest detail ever at the so-called polarized microstructure of the eruptions. The astronomers saw that the burst pattern of FRB20180916B varied from microsecond to microsecond. The most logical explanation for the variation seems to be a "dancing" magnetosphere enveloping a neutron star. 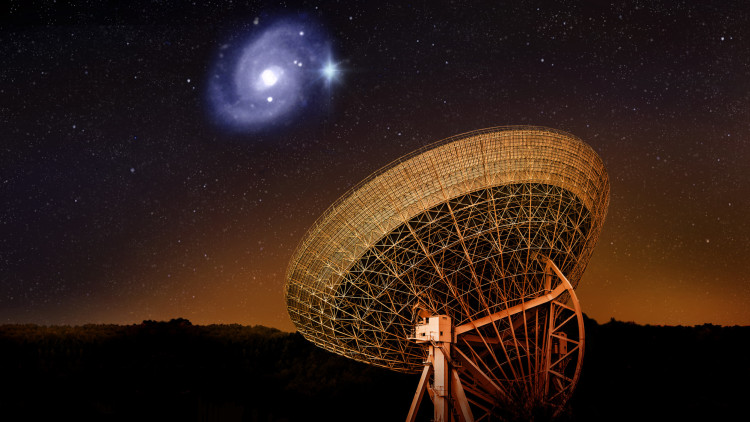 Artistic view of the Effelsberg telescope pointing its dish at the galaxy 500 million light-years from Earth where the famous fast radio burst FRB20180916B sends out bursts of flashes with regularity. (c) Daniëlle Futselaar/ASTRON/HST 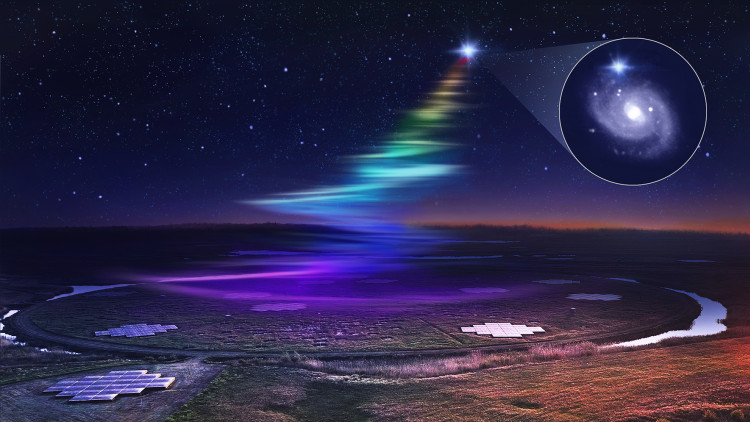 Artistic view of LOFAR's so-called Superterp in Drenthe, the Netherlands, where low frequency radio waves from the fast radio burst FRB20180916B were captured. The FRB is located in a spiral galaxy 500 million light years from Earth. (c) Daniëlle Futselaar/ASTRON/HST