PhD candidate Eva Laplace (University of Amsterdam, the Netherlands) will receive the ET Outreach Award of the Royal Holland Society of Sciences and Humanities. She is awarded the communication prize for her project that portrays the life of stars in an intuitive way. Until now, all teaching methods use hard to comprehend diagrams, such as the Hertzsprung-Russell diagram, which is more than a hundred years old.

French-born Eva Laplace made the program because she experienced that various types of diagrams, including those of Hertzsprung-Russell were obsolete, complex and difficult to explain to students. She wants to deploy her software for students and fellow astronomers and hopes that her software will make it easier to understand what's going on in stars.

Text continues below the demo movie of the life of a star. (c) Eva Laplace

TULIPS
Laplace's tool not only allows astronomers and nonprofessionals  to see the size and color of the star. Other properties such as the changing composition of a star and the processes that take place in the interior of the star also become visible. In addition, stars are easier to compare with each other.

Laplace named her software TULIPS: Tool for Understanding the Lives, Interiors and Physics of Stars. Laplace's software shows the evolution of a star in short movies. The videos not only reveal the evolution and different combustion stages of stars, but also show how those stars appear to us, observing them from Earth. In the lower left corner of the screen, the well-known diagrams, like those of Hertzsprung-Russell, are still visible.

Eva Laplace adds: "TULIPS also provides insight into Kippenhahn diagrams that show the structure and evolution of stars and into diagrams that tell us more about the composition of a star."

Read more below de demo clip of the inside of a star. (c) Eva Laplace

Available in 2021
Laplace used the Python programming language and based her program on models and simulations of the MESA simulation platform. Laplace wants to expand her tool in the near future so that it can also handle her own specialization: the life cycle of binary stars. She also wants to create a web application and produce example animations with common star types. In the future the application and the movies can be used by secondary schools and universities. The programs will be available to everyone free of charge in the first half of 2021.

About the ET Outreach Award
The ET Outreach Award is a 5000 euro prize for young astronomers with a good idea for communication with a large audience. The award exists since 2020, is administered by the Royal Holland Society of Sciences and Humanities (KHMW) and has been made available by the De Zeeuw-Van Dishoeck Fund. That fund was founded by Ewine van Dishoeck and Tim de Zeeuw, a couple of astronomy professors at Leiden University (the Netherlands). Eva Laplace is the first winner of the annual award. She will receive her prize (3500 euro to cover project costs plus 1500 euro to spend freely) on November 30, 2020 and has one year to execute her project. 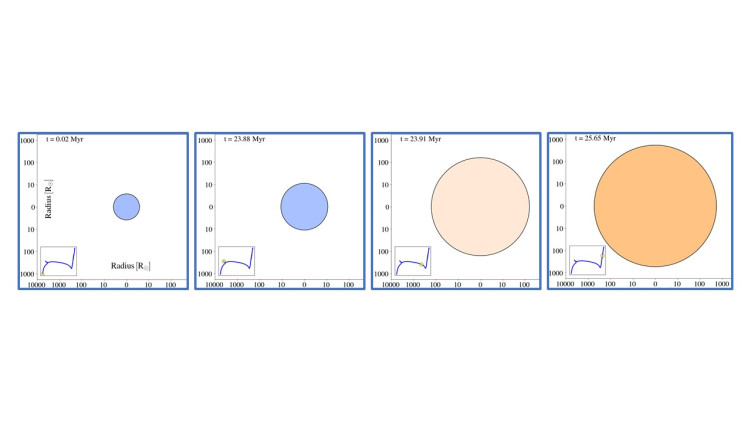 The life of a star (screenshots)
Four screenshots of Eva Laplace's award-winning software visualizing the life of a star. The lower left corner of each screen shows the position of the star in the well-known Hertzsprung-Russell diagram. In the middle of the screen the star can be seen as a colored circle. As time goes by, the star becomes larger (just like in real life) and changes from blue (hot) to red (cold). (c) Eva Laplace