Astronomers already knew that our own Milky Way grew by taking in smaller galaxies. But now a team of Italian-Dutch researchers have shown that a small galaxy neighbouring the Milky Way has in turn absorbed an even smaller galaxy from its vicinity. The researchers will publish their findings on Monday in the journal Nature Astronomy.

According to the prevailing theory, large galaxies such as our Milky Way were formed by mergers with smaller galaxies. In recent years, evidence for this has indeed been found for our Milky Way thanks to the Gaia satellite. An Italian-Dutch team of researchers wanted to prove the hypothesis that small galaxies are in turn made up of even smaller ones.

Globular clusters
To test their hypothesis, the researchers studied the Large Magellanic Cloud, a neighbouring galaxy to our Milky Way. They focused in particular at globular clusters. Globular clusters are groups of thousands to millions of stars. The idea is that the core of such a globular cluster can hold out even after billions of years of pushing and pulling in a galaxy.

The researchers analysed the chemical composition of eleven globular clusters collected by the Very Large Telescope and the Magellan telescopes in Chile.

Of the eleven globular clusters studied in the Large Magellanic Cloud, one was found to have a distinctly different chemical composition. It is globular cluster NGC 2005. This cluster contains about 200,000 stars and is located 750 light years away from the centre of the Large Magellanic Cloud. Among other things, it contains less zinc, copper, silicon and calcium than the ten other clusters.

Relic of earlier merger
Based on the chemical composition of NGC 2005, the researchers deduced that the cluster must be a relic of a small galaxy in which the stars formed rather slowly. Billions of years ago, this small galaxy would have merged with the then not so large Large Magellanic Cloud. Over time, most of the small galaxy was pulled apart and most of the stars were scattered, but the central globular cluster NGC 2005, remained.

Researcher Davide Massari, who works in Italy and at the University of Groningen, is delighted: "We are actually seeing a relic of an earlier merger. And we have now convincingly demonstrated for the first time that small galaxies neighboring our Milky Way have in turn built up from even smaller galaxies." 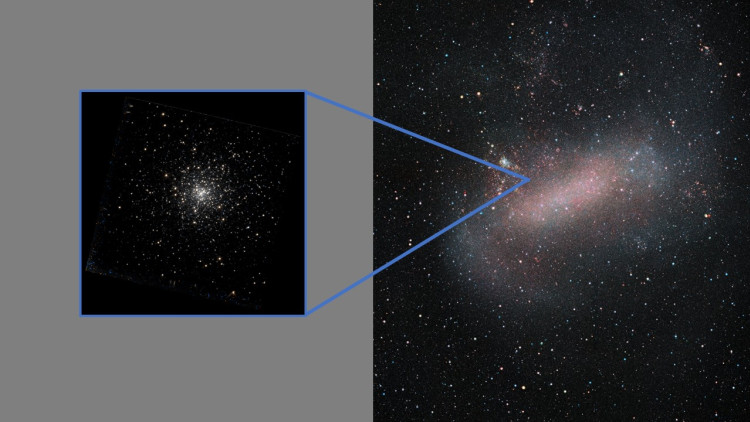