Through the clever use of two types of telescopes, a team of researchers has produced stunning images of clusters of galaxies. This not only produces beautiful images, but also provides more information about the enormous amounts of energy released around supermassive black holes in clusters. The astronomers, led by PhD student Roland Timmerman (Leiden University), will soon publish their method in the journal Astronomy & Astrophysics.

Astronomers have long known that supermassive black holes at the centers of galaxies produce huge jets. These jets shoot away from the black hole and heat the gas in the wider surroundings. When the jets collide with gas, they form huge lobes tens of thousands of light-years in diameter. It can take hundreds of millions of years for these lobes to fade out. Thus, in theory, at least, the lobes give astronomers a lot of information regarding what occurred in a cluster.

The problem, however, is that the information is difficult to extract from the lobes. An international team of astronomers has now put an end to that. They combined measurements from the radio telescope LOFAR, whose core is in the Netherlands, with those from the X-ray satellite Chandra.

Whole greater than sum
"That combination provides a much better idea of what is going on," explains researcher Roland Timmerman (Leiden University). "It's cliché, but the whole is really greater than the sum of the parts here. Chandra and LOFAR can individually make a pretty reasonable guess about the amount of energy injected by the black hole into the cluster environment, but together they are even stronger. Previously, this combination was not possible because no radio images were available with sufficient quality to match Chandra's X-ray images. Because LOFAR antenna stations are now located throughout Europe, the resolution is high enough."

The astronomers now have radio images that are comparable in sharpness to visible-light images from the Hubble telescope. To demonstrate their technique, they imaged the Perseus cluster. That is a group of more than a thousand galaxies located about 240 million light-years in the direction of the northern constellation Perseus.

Meanwhile, astronomers are creating composite images of other clusters of galaxies. With the underlying data, they hope to understand more about the interactions between galaxies and their surroundings in the early universe. 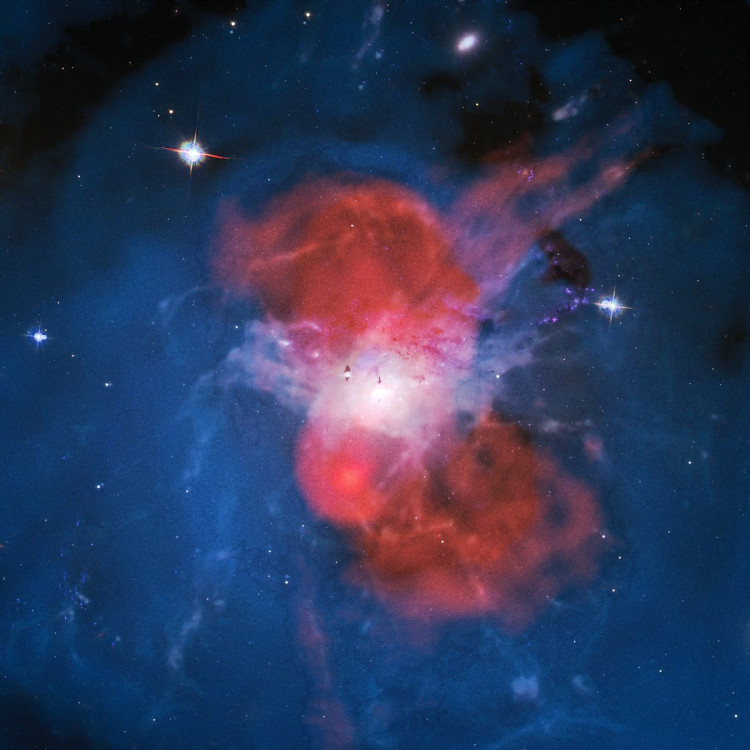 Composite image of the center of the Perseus galaxy cluster. Red is the radio emission received by LOFAR. Blue is X-rays by the Chandra telescope. White is hydrogen from the H-alpha map of the WIYN telescope. And the background is the night sky in optical light from the Hubble telescope. (c) LOFAR/Chandra/WIYN/Hubble/Frits Sweijen [high resolution]