All supermassive black holes in the centres of galaxies appear to have periods when they swallow matter from their close surroundings. But that is about as far as the similarities go. That's the conclusion reached by British and Dutch astronomers from their research with ultra-sensitive radio telescopes in a well-studied region of the universe. They publish their findings in two articles in the international journal Astronomy & Astrophysics.

Astronomers have studied active galaxies since the 1950s. Active galaxies have a super-massive black hole at their centre that is swallowing matter. During these active phases the objects often emit extremely strong radio, infrared, ultraviolet and X-ray radiation.

In two new publications, an international team of astronomers focused on all the active galaxies in the well-studied GOODS-North region in the constellation of Ursa Major. Until now that region had been studied mainly by space telescopes collecting visible light, infrared light and UV light. The new observations add data from sensitive networks of radio telescopes, including the UK’s e-MERLIN national facility and the European VLBI Network (EVN).

Three conclusions
Thanks to this systematic study, three things become clear. Firstly, it turns out that the nuclei of many different types of galaxies can be active, in different ways. Some are extremely greedy, gobbling up as much material as they can, others digest their 'food' more slowly, and others are nearly starving of hunger.

Secondly, occasionally an accretion phase occurs simultaneous with a star-formation phase and sometimes not. If star formation is ongoing, activity in the nucleus is difficult to detect.

Thirdly, the nuclear accretion process may, or may not, generate radio jets – regardless the speed at which the black hole swallows its food.

Good news
According to principal investigator Jack Radcliffe (formerly University of Groningen and ASTRON in the Netherlands and University of Manchester in the United Kingdom, now University of Pretoria, South Africa), the observations also show that radio telescopes are optimally useful to study the eating habits of black holes in the distant universe. "That's good news, because the SKA radio telescopes are coming and they will allow us to look deeper into the universe with even more detail."

Co-author Peter Barthel (University of Groningen, the Netherlands) adds: "We are getting more and more indications that all galaxies have enormously massive black holes in their centres. Of course, these must have grown to their current mass. It seems that, thanks to our observations, we now have these growth processes in view and are slowly but surely starting to understand them."

Co-author Michael Garrett (University of Manchester, United Kingdom) adds: "These beautiful results demonstrate the unique capacities of radio astronomy. Telescopes such as the VLA, e-MERLIN and the EVN are transforming our view of how galaxies evolve in the early universe." 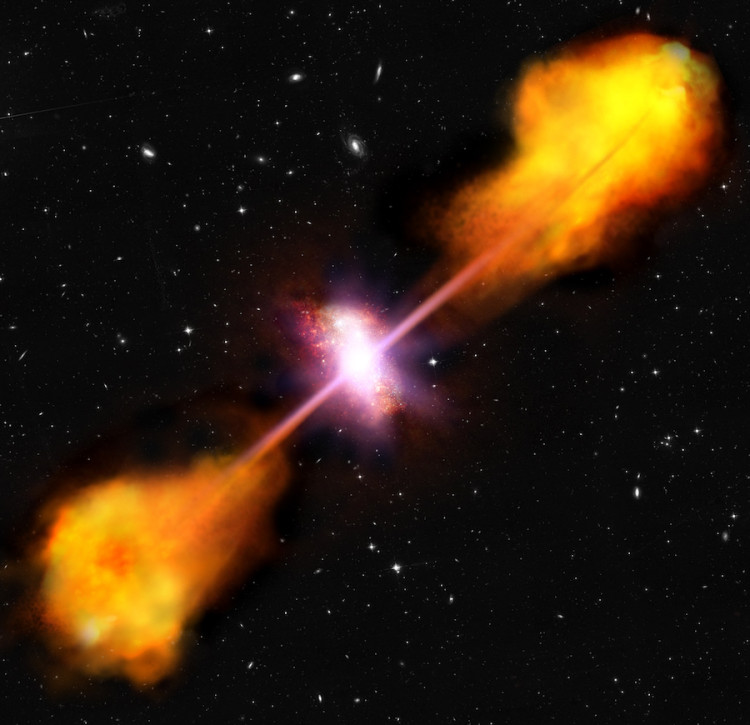 Artist’s impression of a galaxy with an active nucleus, a supermassive black hole in the centre. When the black hole swallows matter, two powerful jets can form at the edges of the black hole. These jets form gigantic 'radio clouds' that can be detected by radio telescopes. (c) ESA/C. Carreau