A black hole gets a large corona first, and only after that it emits jets. This is revealed, among other things, by the heart beat graph that an international team of astronomers has made of a black hole and a star orbiting around each other. The team, led by Mariano Méndez from the University of Groningen (the Netherlands), will publish their results on Monday in Nature Astronomy.

Just as the blood in a human heart cannot be in the atrium and in ventricles at the same time, a black hole also appears to first collect material and heat it up in a so-called corona, only then to spit it out in jets. "It sounds logical, but there has been a debate for twenty years about whether the corona and the jet were simply the same thing. Now we see that they arise one after the other and that the jet follows from the corona," says principal investigator Mariano Méndez (Kapteyn Institute, University of Groningen, the Netherlands). "It was quite a challenge to demonstrate this sequential nature. We had to compare data of years with that of seconds, and of very high energies with very low ones."

15 years of data
The researchers collected 15 years of data from several telescopes. Amongst others, they pointed the Rossi X-ray Timing Explorer at the black hole GRS 1915+105 from space about every three days and collected high-energy X-ray radiation from the corona. The astronomers combined the X-ray data with those of the Ryle Telescope. This is a collection of radio dishes about ninety kilometres north of London, which collect low-energy radio radiation from the jet of the black hole almost every day.

The black hole GRS 1915+105 is not an isolated black hole, but a double system consisting of a black hole and a normal star that circle around each other. This double system lies in our Milky Way at about 36,000 light years from us in the direction of the constellation Aquila. The black hole weighs about as much as twelve times our Sun, making it one of the heaviest known stellar black holes.

The researchers suggest that the principle they demonstrated may also apply to heavier black holes, for example to the supermassive black hole at the centre of our Galaxy. 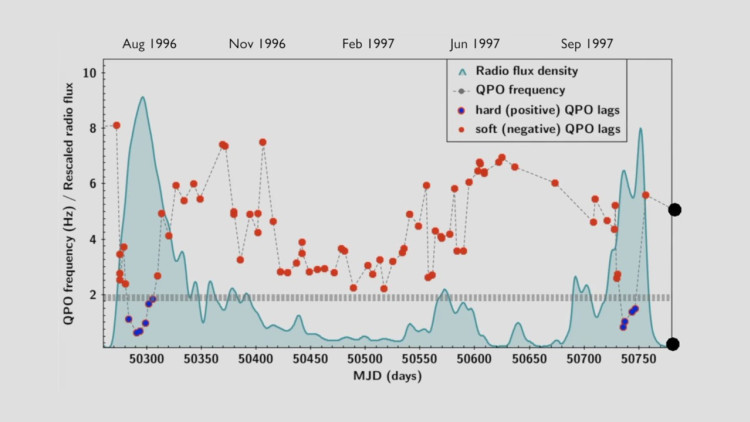 Fragment of the 'heartbeat' of a black hole. The horizontal x-axis shows the days. This video shows 500 days of data. The green curve is the radio emission. At the green peaks the jet is the strongest. The red and blue dots show the X-ray radiation and are a measure of the size of the corona. The blue dots show that the corona is smallest and the jet is strongest, so the jets always occur when the corona is smallest. (c) Méndez et al.
[high resolution | movie with sound like a heart monitor | movie with sound an comparison with a heart monitor] 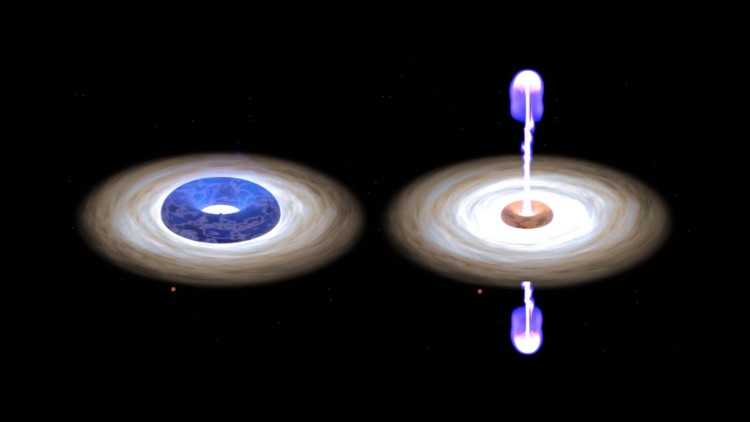 Two screenshots of the animation of two phases of a black hole. On the left, a big and hot corona, the disc of material depicted in blue, has formed around the centre of the black hole and there is no jet. On the right, the corona is smaller and cooler (depicted in red/orange) and the black hole ejects the jet (c) Méndez et al.
[high resolution | movie]