An international team of astronomers led by researchers from the Netherlands has discovered a whirlwind of dust and pebbles in orbit around a young star. It is possible that a planet is forming in the pebbles. The team of scientists made the discovery during the time that designers and developers of an astronomical instrument get as a reward for their work. They will soon publish their findings in the journal Astronomy & Astrophysics.

The exoplanet-in-the-making orbits the star HD 163296 in a close orbit. HD 163296 is a young star much studied by astronomers about 330 light-years away from Earth in the constellation of Sagittarius. Previously, astronomers found evidence for the formation of three large exoplanets in a wide orbit around the star. Now, they may be adding a fourth planet close to the star.

The researchers led by Jozsef Varga (Leiden University, the Netherlands) studied the star during four nights in March and June 2019. They had focused their telescope on the inner part of the disk of dust and pebbles that orbit the star. The astronomers observed a ring of warm, fine dust at a distance from the star comparable to Mercury's orbit around our Sun. What was striking was that one part of the ring was much brighter, i.e. hotter, than the rest of the ring. This hot spot seemed to orbit the star in one month.

The astronomers suspect that the hot spot of warm, fine dust is a vortex in the disk from which a planet could be formed. They can support their suspicion with simulations. While in the rest of the disk dust and pebbles clump together, in the vortex the pebbles are actually ground into fine dust. That fine dust is visible in the hot spot.

MATISSE
The researchers made their discovery with the new MATISSE instrument. That instrument combines and analyzes light from four telescopes of the ESO Observatory's Very Large Telescope on Cerro Paranal, in northern Chile. This creates a combined telescope with a virtual diameter of 200 meters. The MATISSE instrument is made especially to analyze infrared radiation. Such radiation is created when an object, such as a planet or dust disk gives off heat. The instrument is cooled to prevent it from emitting infrared radiation itself.

The Netherlands Research School for Astronomy (NOVA) built all the lenses and mirrors in the cooled part of MATISSE together with Dutch industry. In 2018, MATISSE saw its "first light" with a series of test observations. 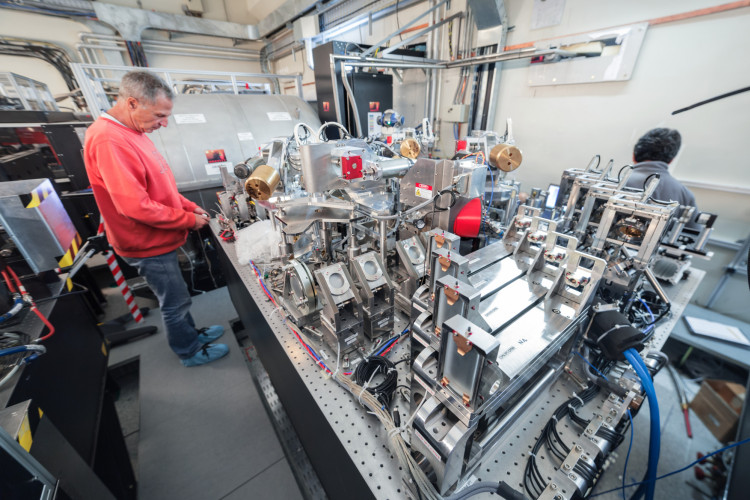 The MATISSE instrument is located on the Very Large Telescope Interferometer (VLTI) at the ESO Observatory at Paranal, in northern Chile. (c) ESO/P. Horálek

Future
For the researchers and engineers from, amongst others, Leiden University, University of Amsterdam, Radboud University Nijmegen, SRON and the NOVA Optical Infrared Group, this first, real scientific result marks the beginning of further research. One of the goals is to study more stars with dust disks and especially dust disks in which earthlike planets can form.