Analysis of the very first image from the James Webb Space Telescope shows that the MIRI instrument, developed in the Netherlands, works even better than thought. Researchers from the University of Groningen demonstrate that the infrared telescope shows details of galaxies from the time when the universe was only about 1 billion years old. This period is important to astronomers because that is when the first galaxies were formed. The analysis will soon appear in The Astrophysical Journal.

For the past twenty years, researchers had to rely on infrared images from Spitzer. This telescope could only look back at long wavelengths to about 2 to 3 billion years after the Big Bang. "You might think the one billion years off by Webb doesn't matter that much," says research leader Edoardo Iani (University of Groningen) "But you arrive right at the time when the first galaxies were formed. So we are very happy with our findings."

Thanks to infrared images from the James Webb Space Telescope, astronomers were able to spot, among other things, galaxies that had not been discovered yet. They were also able to calculate more precisely how many stars were present in very young, distant galaxies. The reason why earlier estimates with the Hubble Space Telescope were inaccurate, is that those did not collect much of the originally visible light because it was stretched by the expansion of the universe.

Co-author of the analysis Karina Caputi (University of Groningen), expects more and deeper images to become available soon. "Maybe it will allow us to penetrate a bit into the dark ages. When we designed the MIRI instrument, we had secretly hoped that we would achieve that, but now it looks like it's actually going to happen."

About MIRI
MIRI was developed by NASA and ESA together with several European partners. The MIRI spectrometer was realized thanks to the efforts of the Netherlands Research School for Astronomy (NOVA) and research institutes in the United Kingdom and Germany. Design and construction were carried out by the NOVA Optical-Infrared Group at ASTRON in Dwingeloo in collaboration with several other Dutch institutes and universities. 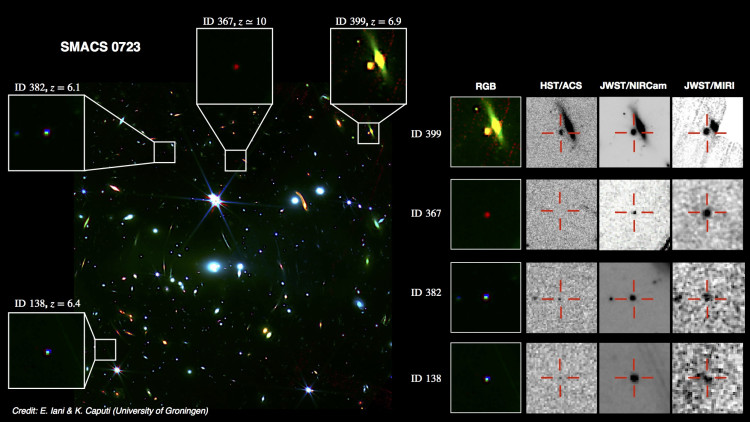