An international team of astronomers led by scientists from Leiden University has for the first time characterized a dust disk surrounding a young super-Jupiter, which is either a giant planet or brown dwarf. They used so-called direct imaging observations at mid-infrared wavelengths. They detected emission from the disk and speculate that moons may have formed. The researchers will publish their findings in The Astronomical Journal.

Astronomers have been expecting that young gas giants and brown dwarfs have a dust disk around them that can form moons, similar to the formation of planets in a disk around a young star. There is, for example, evidence of a giant ring system that was discovered in the brightness variations of a star when the rings passed in front. Now, for the first time, researchers have examined in detail the thermal radiation of a disk of gas and dust around a massive super-Jupiter.

The origin of these type of objects is a mystery. It is not clear whether GQ Lupi B formed via a planet-like or star-like route. GQ Lupi B was discovered in 2004 when a high-contrast photograph was taken of the star GQ Lupi. Since then, astronomers from all around the globe have been investigating the atmosphere and orbital motion of this super-Jupiter.

Very Large Telescope
In the recent study, the astronomers used the instruments NACO and MUSE. These are linked to the Very Large Telescope of the European Southern Observatory in Chile. Using the infrared camera NACO, the astronomers observed infrared light coming from the dust disk. From this, they determined that the disk is much cooler than the hot atmosphere of GQ Lupi B. The researchers suggest that the low temperature indicates a central cavity in the disk. They suspect that the dust may have been swept away here by the formation of moons. But it could also be that the disk is influenced by a magnetic field of GQ Lupi B.

Using MUSE, a very stable spectrograph operating in the visual part of the light spectrum, the researchers measured so-called H-alpha radiation. This indicates that GQ Lupi B is still growing, thanks to the supply of gas from its own disk and possibly also from the disk of the star around which this super-Jupiter is orbiting.

In the future, the researchers hope to examine the disk of GQ Lupi B in more detail. "The James Webb Space Telescope will soon be launched and offers exciting opportunities," says research leader Tomas Stolker (Leiden University, the Netherlands). "Webb can take spectra at mid-infrared wavelengths. That is very challenging from Earth. In doing so, we could learn much more about the physical and chemical processes in the disk of GQ Lupi B that may enable the formation of moons."

Giant planet or brown dwarf?
With the discovery of new exoplanets, it is not always clear whether the object is a planet or a brown dwarf. This is especially difficult to determine for directly observed objects such as GQ Lupi B because their masses are often uncertain. That is why researchers tend to keep an open mind and speak of 'a giant planet or brown dwarf' in the same breath. And that is why the B in GQ Lupi B is sometimes written with a capital letter (because it is a brown dwarf) and sometimes with a small letter (because it is a planet). 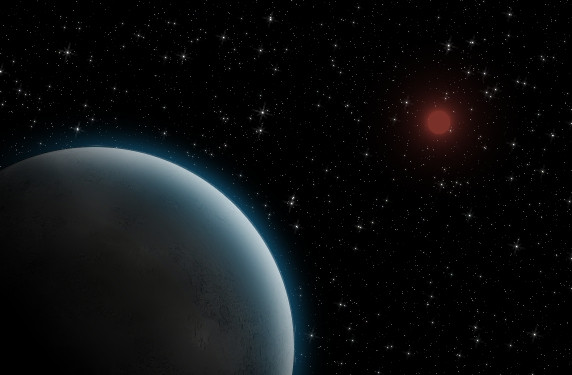 Old artistic impression of GQ Lupi B (front left) and the main star GQ Lupi (right). At the time of this drawing, in 2010, the dust disk around GQ Lupi B had not yet been discovered. (c) Devon1980 [CC BY-SA 3.0 via Wikimedia]