An international team of astronomers, including several from the Netherlands, has mapped a piece of the cosmic web without using bright quasars for the first time. Their findings will be published shortly in the journal Astronomy & Astrophysics.

Astronomers have long assumed that the billions of galaxies in our universe are connected by a huge cosmic web of gas flows. The web itself is difficult to see because it generates almost no light. Until now, only nodes in the cosmic web had been mapped using quasars. These are supermassive black holes in the centers of galaxies whose surroundings emit enormous amounts of light. The light is then scattered by the cosmic web, making the web around the quasars visible. Unfortunately, quasars are rare. Moreover, they are only located at nodes of the cosmic web. As a result, they provide a limited view.

And now, for the first time, researchers have managed to see a small piece of the cosmic web without using quasars. A team led by Roland Bacon (CNRS, Centre de Recherche Astrophysique de Lyon, France) focused the Very Large Telescope on a part of the iconic Hubble Ultra Deep Field for 140 hours ( over 6 nights between August 2018 and January 2019).

Using the Multi Unit Spectroscopic Explorer (MUSE), the researchers were able to capture the light from groups of stars and galaxies that was scattered by gas filaments from the cosmic web. This is light from about two billion years after the Big Bang.

The observations showed that potentially more than half of the scattered light comes not from large bright radiating sources, but from a sea of previously undiscovered galaxies of very low luminosity that are far too dim to be observed individually.

The results strengthen the hypothesis that the young universe consisted of vast numbers of, small groups of freshly formed stars. Co-author Joop Schaye (Leiden Observatory, Leiden University, the Netherlands): "We think that the light we are seeing comes mainly from young galaxies, each containing millions of times fewer stars than our own Milky Way. Such tiny galaxies were likely responsible for the end of the cosmic 'dark ages', when less than a billion years after the Big Bang, the universe was illuminated and heated by the first generations of stars."

Co-author Michael Maseda (Leiden Observatory, Leiden University) adds, "The MUSE observations thus not only give us a picture of the cosmic web, but also provide new evidence for the existence of the extremely small galaxies that play such a crucial role in models of the early universe."

In the future, the astronomers would like to map larger pieces of the cosmic web. That's why they are working to improve the MUSE instrument so that it provides a two to four times larger field of view. 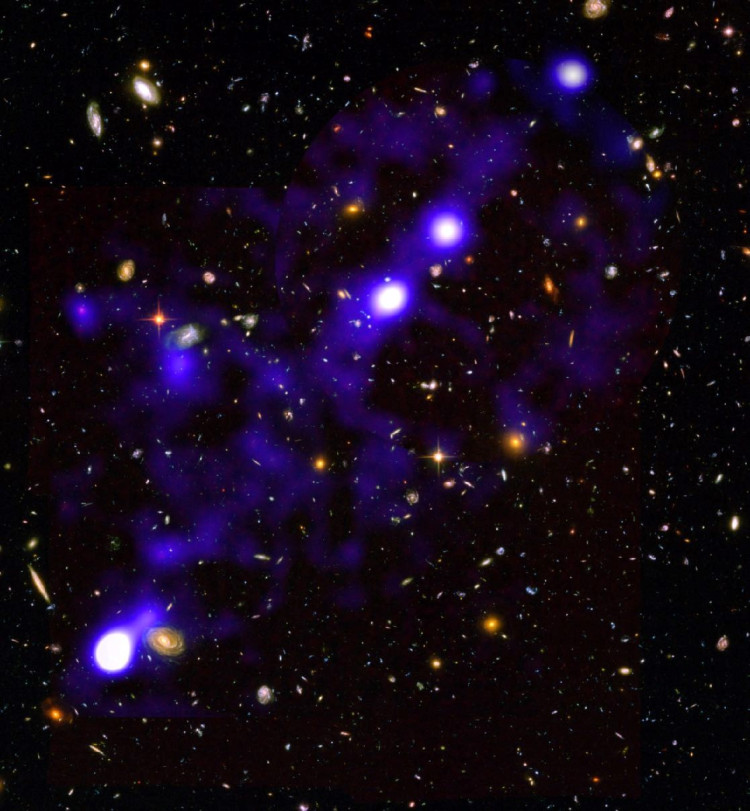 An image of some two billion years after the Big Bang in the constellation Fornax (Oven). Each point of light is an entire galaxy. The blue silk of the cosmic web was discovered with MUSE. The gas extends over a distance of 15 million light years. That's roughly equivalent to 150 times our Milky Way placed back to back. (c) ESO/NASA/Roland Bacon et al.