A team of astronomers of Leiden University (the Netherlands) and the University of Texas (Austin, United States) has discovered a new way to map distant galaxies. They used an atomic oxygen spectral line for this. Normally, this spectral line cannot be captured with terrestrial telescopes. But because the light comes from distant galaxies, it is stretched and it can actually be measured on Earth. Recently, an instrument developed in the Netherlands made this measurement. The researchers will publish their findings in the journal The Astrophysical Journal Letters.

For their observations, the researchers used the SEPIA660 receiver on the APEX telescope in Chile. This receiver was developed by the Dutch Research School for Astronomy (NOVA) and installed on the telescope in 2018. APEX [https://www.hq.eso.org/public/teles-instr/apex] is a collaboration between the Max Planck Institute for Radio Astronomy (Germany), the Onsala Space Observatory (Sweden), and the European Southern Observatory, ESO.

The researchers had to aim the telescope for two hours in one place to detect the galaxy G09.83808. That galaxy stems from a billion years after the big bang. It therefore belongs to the oldest galaxies in the universe.

In the future, the researchers want to map even more distant galaxies based on the oxygen line. They have already calculated that the ALMA observatory in Chile needs just ten to fifteen minutes to see a distant galaxy in detail.

In recent years, astronomers have been discovering more and more galaxies in the early universe. For details about the circumstances that prevailed at that time, research with spectral lines is needed. Until now, astronomers have used lines of ionized carbon and double ionized oxygen, but that combination is difficult to interpret. (text continues below photo) 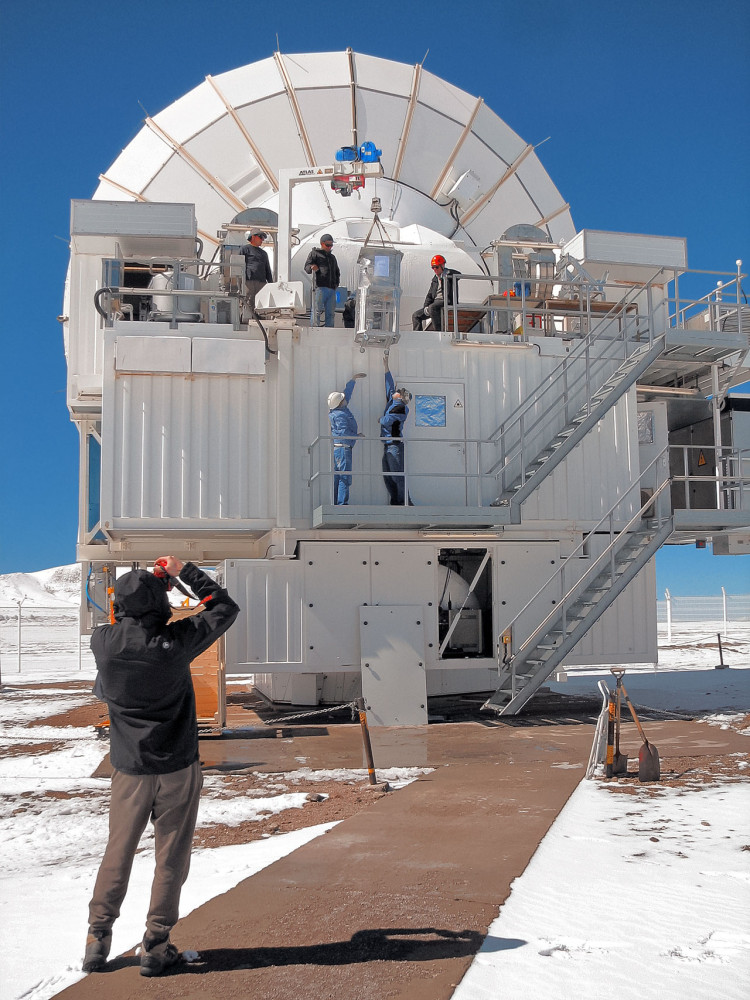 The discovery was made using the SEPIA instrument on the APEX telescope in Chile. On this archive photo the instrument is being hoisted inwards. The instrument was partly developed in the Netherlands by the Netherlands Research School for Astronomy (NOVA). (c) ESO / Onsala Space Observatory / A. Ermakov

The new atomic oxygen spectral line has been seen as a holy grail for twenty years, but the galaxies really have to be far away. For not too distant galaxies, the light from the oxygen line does not penetrate through the earth's atmosphere. But, even when galaxies are very far away, you need very good telescopes in a high, dry places. Now, the telescopes are good enough. And therefore, for the very first time, astronomers have been able to spot distant galaxies with the atomic oxygen spectral line.

The results are so new and special that they find their way to the scientific world at the proverbial lightning speed. Normally it takes one or two years for scientific results to be published. Now the results were accepted within two months. Lead researcher Matus Rybak (Leiden Observatory, Leiden University, the Netherlands) says: "We did our observations at the end of October and now they are already accepted for publication. That shows that the astronomical world has been really waiting for it."

The researchers emphasize that they owe the observations to the alert staff members of the Chile telescope. One of the employees saw that exceptionally good weather was coming and was controlling the telescope on his own.

Dutch version of this release