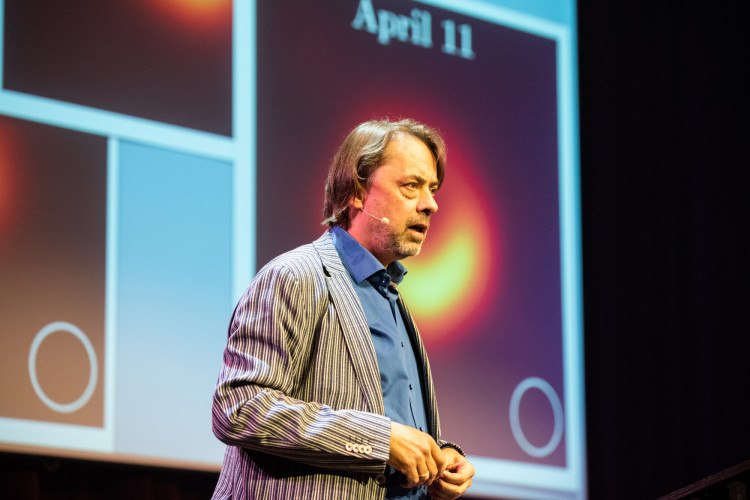 The Dutch astronomer Huib van Langevelde (of JIVE, Dwingeloo, and Professor of Galactic Radio Astronomy at Leiden) has been selected as the new director of the Event Horizon Telescope (EHT). The EHT is a collaboration involving about 350 scientists from 18 countries. The EHT combines the ALMA array in Chile with sub-millimeter telescopes around the world and published the first image of a Black Hole in 2019.

During his PhD research Van Langevelde already focused on what is happening in the center of our Galaxy. At JIVE he became an expert in Very Long Baseline Interferometry (VLBI), the technique used by the EHT. During the EHT VLBI observations, telescopes around the world observe simultaneously in order to obtain an image with extreme resolution by effectively constructing a telescope as big as the world for observations at millimeter wavelength.

The EHT was assembled to obtain images of the supermassive Black Holes at the centers of the galaxy M87 and the Milky Way, where Sagittarius A* is the radio source associated with the central Black Hole. In 2019 the consortium observations of M87 resulted in the very first image of a Black Hole.

Van Langevelde is ready for the challenge: “I will be overseeing a complex, global collaboration of scientists with a range of cultures and ambitions. Their expertise needs to be bundled in order to achieve exciting new results.”

In this new role Van Langevelde will be supported by a joint effort of institutes in the Netherlands which are already contributing to the project with specific expertise, for example in the use of the ALMA telescope, the VLBI technique and the astrophysics of Black Holes. In particular, astronomers at the Radboud University (the groups led by Heino Falcke and Monika Moscibrodzka) and University of Amsterdam (the groups led by Sera Markoff and Oliver Porth) are involved in the project. The Dutch ALMA center of expertise, Allegro, is hosted at Leiden University.

JIVE, which receives funding from NWO and ASTRON, is a European institute providing access to the European VLBI Network, and has also developed software that is used for EHT data processing. In Groningen, the NOVA group develops sub-millimeter receivers for the ALMA telescope.

As EHT director Huib van Langevelde is the successor of Shep Doeleman.

Note for the press