An international team of astronomers has shown in a laboratory at Leiden University (the Netherlands) that methane can form on icy dust particles in space. The possibility had existed for quite some time, but because the conditions in space were difficult to simulate, it was not possible to prove this under relevant space conditions. The researchers will publish their findings Monday evening in the journal, Nature Astronomy. 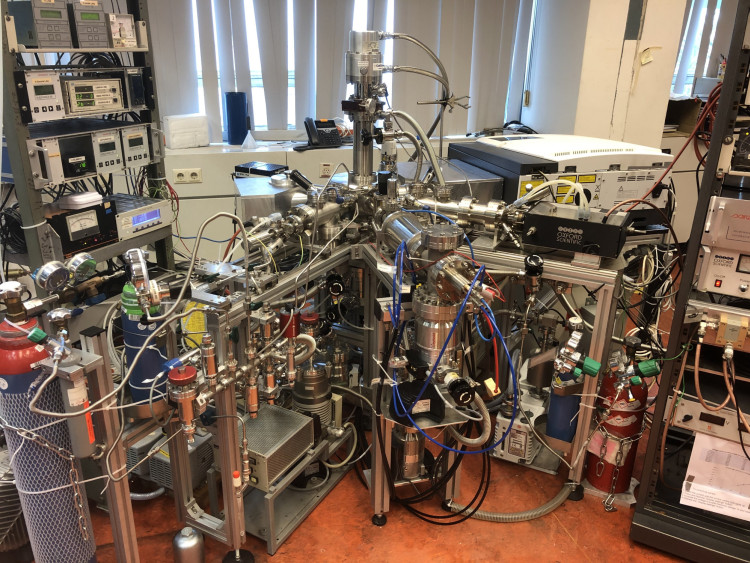 Methane, known to us as main compound of natural gas, is one of the simplest hydrocarbons. It consists of a carbon atom with four hydrogen atoms: CH4. On Earth, we mainly know methane as a flammable gas that forms from decaying organic material. Methane is also available in space as a gas, liquid, or ice. For example, Neptune and Uranus contain, in addition to hydrogen and helium, mainly methane gas. Saturn's moon, Titan, the only moon in our Solar System with a dense atmosphere, does not rain water but liquefied methane. Outside of our Solar System in interstellar space, methane ice is one of the ten most abundant ices to be detected.

Hangout
The prevailing opinion about how methane is created in space is that CH is formed first, then CH2, CH3, and finally CH4. In the gas phase, this reaction is slow.  But because methane is formed on an icy dust grain, the grain itself helps speed-up the formation process. For example, dust grains provide a “hangout” spot for atoms, increasing their likelihood to meet each other in the vastness of space. They can also absorb the energy that is produced from chemical reactions that would otherwise break apart molecules, such as methane.

Researchers from the Laboratory for Astrophysics at Leiden Observatory (Leiden University, the Netherlands) have now for the first time succeeded in making methane under relevant space conditions. They let hydrogen atoms collide with carbon atoms at minus 263 degrees Celsius (-442 °F, 10 K) in an ultrahigh vacuum environment on an ice-cold surface.

The Surfreside-3 instrument from Leiden University (the Netherlands). With this, the researchers made methane ice on a surface under conditions that apply to investigating the chemistry in interstellar molecular clouds: minus 263 degrees Celsius (10 K) in an ultrahigh vacuum environment. (c) LfA/Leiden Observatory

Sticky carbon
The researchers had previously succeeded in making water (H2O) and ammonia (NH3) in a similar way. They did so by letting oxygen and nitrogen atoms react with hydrogen atoms. However, reactions with carbon atoms proved to be more challenging. That is because carbon is very sticky, which makes experimenting with it very difficult. Danna Qasim, PhD student at Leiden Observatory and lead author of the scientific publication in Nature Astronomy, adds: "It is difficult to conduct an experiment with carbon atoms. Carbon likes to stick, so it is challenging to produce a controlled beam of pure carbon atoms. At the same time, you have to make sure that after an experiment, your entire setup is not completely covered with carbon.”

The researchers were able to vary the conditions in their experiments. This allowed them to investigate exactly how and how efficiently methane can be formed by the reaction of carbon and hydrogen atoms.

It was found that methane ice is better formed in a water-rich environment. This is consistent with astronomical observations, which show that methane ice and water ice are expected to form simultaneously in space.

The processes that the researchers in the laboratory have investigated, mimic the conditions that exist in space before new stars and planets form. The research supports that the methane we find on planets, such as Uranus and Neptune, was probably available long before our Solar System was formed.

Dutch version of this news release