UNDER EMBARGO UNTIL MONDAY 29 JUNE 10 AM CEST

Astronomers have made the first measurement of spin-orbit alignment for a directly-imaged exoplanet, namely on the Beta Pictoris system. Beta Pictoris b is a 11 Jupiter-mass planet that orbits a young star on a similar orbit as Saturn in our solar system. They find that the stellar rotation axis is aligned with the orbital axes of the planet Beta Pictoris b and its extended debris disc.

The results, presented at the online annual meeting of the European Astronomical Society (EAS), and published today in The Astrophysical Journal Letters, mark the first time that the spin-orbit alignment has been measured for a directly-imaged planetary system. For the measurements, the astronomers used the GRAVITY instrument at the VLTI, that combines the light from telescopes separated 140 meters apart. The international team lead by Prof. Stefan Kraus from the University of Exeter, devised an innovative method to measure the tiny spatial displacement of less than a billionth of a degree that is caused by Beta Pictoris’ rotation.

Some of the earliest theories of the planet formation process were proposed by Kant & Laplace in the 18th century. They noted that the orbits of the solar system planets are aligned with each other, and with the Sun’s spin axis, and concluded that the solar system formed from a rotating and flattened protoplanetary disc.

“It was a major surprise when it was found that more than a third of all close-in exoplanets orbit their host star on orbits that are misaligned with respect to the stellar equator”, said Prof. Kraus. “A few exoplanets were even found to orbit in the opposite direction than the rotation direction of the star. These observations challenge the perception of planet formation as a neat and well-ordered process taking place in a geometrically thin and co-planar disc.”

Several possible dynamical mechanisms have been proposed to explain the observed spin-orbit misalignments for close-in planets. One explanation is that the planets form in the outer disc, but are ‘kicked out’ of the disc plane through dynamical interactions with other planets or nearby stars. These interactions could increase the obliquity of the orbit, while also causing the planet to migrate inwards. In this case, one would expect to observe oblique orbits predominately for planets on close-in orbits, such as the ‘Hot Jupiters’ that orbit their host star with periods of just a few days or weeks.

Alternatively, the planets might form already on misaligned orbits, for instance if the disc is warped or the star and disc get misaligned as part of the star formation process or early disc evolution. In these scenarios one would expect to observe also wide-separation planets on misaligned orbits.

Therefore, a promising way to study the origin of the obliquity of exoplanets is to measure the misalignment angle between the stellar spin and the planet’s orbit over a wide range of orbit separations. Unfortunately, the conventional spectroscopic method for measuring spin-orbit alignments only works for very close-in planets that happen to transit in front of the star, but cannot be applied the directly-imaged, wide-separation exoplanets.

For the new measurement, the astronomers used the GRAVITY instrument at the VLTI, that combines the light from telescopes separated 140 meters apart. “Gas absorption in the stellar atmosphere causes a tiny spatial displacement in spectral lines that can be used to determine the orientation of the stellar rotation axis”, said Dr. Jean-Baptiste LeBouquin, an astronomer at the University of Grenoble in France and a member of the team. “The challenge is that this spatial displacement is extremely small: about 1/100th of the apparent diameter of the star, or the equivalent to the size of a human footstep on the moon as seen from Earth.”

The results show that the Beta Pictoris system is as well-aligned as our own solar system. This finding favors planet-planet scattering as the cause for the orbit obliquities that are observed in more exotic systems with Hot Jupiters. However, observations on a large sample of planetary systems will be required to answer this question conclusively. The team proposes a new interferometric instrument that will allow them to obtain these measurements on many more planetary systems that are about to be discovered. “A dedicated high-spectral resolution instrument at VLTI could measure the spin-orbit alignment for hundreds of planetary systems”, said Prof. Kraus, “and, ultimately, answer the question what dynamical processes shape the architecture of planetary systems.”

The European Astronomical Society (EAS) promotes and advances astronomy in Europe. As an independent body, the EAS is able to act on matters that need to be handled at a European level on behalf of the European astronomical community. In its endeavours the EAS collaborates with affiliated national astronomical societies and also with pan-European research organisations and networks. Founded in 1990, the EAS is a society of individual members. All astronomers may join the society, irrespective of their field of research, or their country of work or origin. In addition, corporations, publishers and non-profit organisations can become organizational members of the EAS. The EAS, together with one of its affiliated societies, organises the annual EAS meeting to enhance its links with national communities, to broaden connections between individual members and to promote European networks. 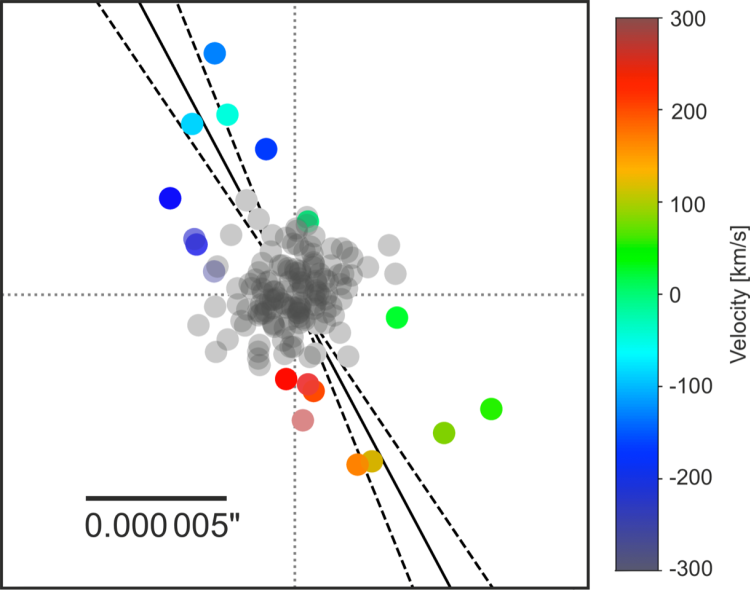 Figure 2: To derive the stellar rotation axis of Beta Pictoris the team used the unique high angular and high spectral resolution mode of VLTI/GRAVITY to measure shifts in the centroid position in the hydrogen Brackett-gamma absorption line on micro-arcsecond scales. In the blue-shifted part of the line, the centroid of the emission is displaced to the North-East, which indicates that the South-Western hemisphere of the star is approaching the observer.