An international team of researchers led by Leiden University (the Netherlands) has mapped nine gigantic collisions of galaxy clusters. The collisions took place seven billion years ago and could be observed because they accelerate particles to high speeds. It is the first time that collisions of such distant clusters have been studied. The researchers publish their findings in the journal Nature Astronomy on Monday evening 2 November. 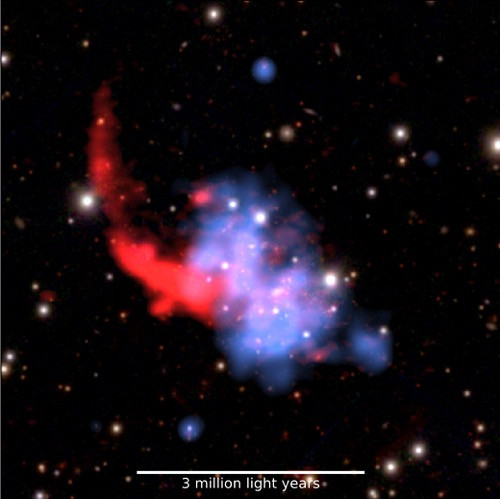 Image of a distant cluster of galaxies (PSZ2 G091.83+26.11) at 7 billion light years from Earth. The most yellowish-white spots are complete galaxies, some spots are foreground stars. The X-rays (blue) stem from gas of about 10 million to 100 million degrees hot. The radio waves (red) originate from particles that have been accelerated to almost the speed of light. (c) PanSTARRS/NASA/ Chandra/LOFAR

Galaxy clusters are the largest structures in the Universe. They can consist of thousands of galaxies, each with billions of stars. When such clusters merge, the electrons between them are accelerated to almost the speed of light. The accelerated particles emit radio waves when they come into contact with magnetic fields in the clusters.

Until now, telescopes were not powerful enough to receive radio waves from distant colliding clusters. But thanks to the Dutch-European network of linked LOFAR antennas and an 'exposure time' of eight hours per cluster, the researchers were able to collect detailed data from distant clusters for the first time.

The data show, among other things, that the radio emission from distant colliding clusters is brighter than previously expected. According to prevailing theories, cluster radio emission originates from electrons that are accelerated by the turbulent motions. Research leader Gabriella Di Gennaro, PhD candidate at Leiden University (the Netherlands) adds: "We therefore think that the turbulence and vortices caused by the collisions are strong enough to accelerate particles also in a young Universe."

Furthermore, the magnetic fields in the distant clusters turned out to be about as strong as in previously investigated nearby clusters. According to co-author and magnetic field expert Gianfranco Brunetti (INAF-Bologna, Italy), this was unexpected: "We do not yet know how these magnetic fields can be so strong in a still young Universe, yet our study provides important constraints on their origin. We expect that future observations of distant clusters will provide more insight."